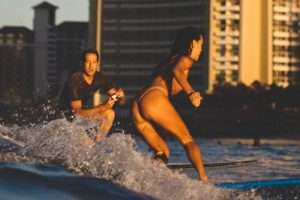 (NEW YORK POST) —  A surfer dude from Hawaii shocked his girlfriend in the most surf bum way — by accidentally dropping the engagement ring in the surf.

Christopher Garth, 38, had gone out surfing with his sweetheart Lauren Oiye, 32, in their native Honolulu with the ring in his pocket, Hawaii News Now reported.

While riding a wave, Garth knelt down on one knee with Oiye surfing next to him — and popped the question. Just as the ring slipped from his fingers, his love said, “Yes!”

“I turn back to make sure he was on the wave with me and he was on one knee with a ring box and screamed out ‘Lauren, I love you! Will you marry me?!’” Oiye, a therapist and yoga instructor, wrote of the engagement on Instagram.

“At first I thought it was a joke and then realized it clearly wasn’t.”

Relax: Garth, executive director of the Hawai’i Dispensary Alliance, might be a beach bum — but he is no dummy. The ring was a decoy.

Anticipating some choppy white caps, Garth had the real rock waiting for his gal on the shore of Queen’s Beach in Waikiki.

Turns out the pair actually bonded over a shared love of the ocean.

“We caught a wave together at the surf break we met at and had many of our first dates,” Oiye wrote on Insta. “Christopher Garth, I love you and am so grateful the stars aligned and our ancestors that came before us so beautifully orchestrated this for us!”