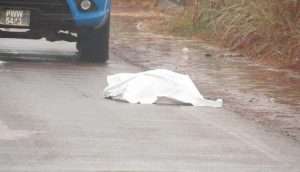 newsroom.gy – Police are investigating the murder of 22-year-old Dico Davi Roberto Moreira whose headless body was found on the Tabatinga Lethem road in Central Rupununi, Region 9 on Sunday.

Police are looking for his 17-year-old cousin who is suspected to be the murderer; both men are from Bonfim, Brazil.

Police Headquarters revealed that Moreira’s headless body was seen lying on the road in long black pants and a blue jersey with multiple stab wounds to the upper back; both wrists were partly severed.

His sister made a positive identification of the body based on a tattoo on the left hand.

The News Room understands that Moreira and the suspect have had a long-standing dispute after the suspect was involved in an intimate relationship with the mother of Moreira’s child.

It is alleged that on November 11, the suspect stole a bicycle which belonged to Moreira’s mother and sold it in Lethem but Moreira retrieved the bicycle and gave it back to his mother.

It is further alleged that on November 13, the suspect and some of his friends went to Moreira’s house and told his mother that they will kill him.