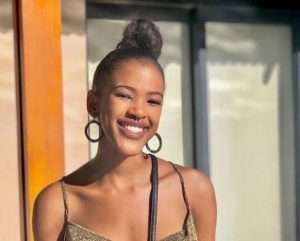 CNN – A man convicted of the rape and murder of South African student at a post office has been handed three life sentences in a case that has come to symbolize the casual violence women in South Africa face.

In August this year, Luyanda Botha, raped and murdered 19-year-old student Uyinene Mrwetyana when she went to pick up a parcel at the Cape Town post office where he worked.
Earlier in the month, she had visited the post office to inquire about her parcel and Botha contacted her a few weeks later on August 24 to let her know it had arrived.
When an unsuspecting Mrwetyana turned up, Botha raped and attacked her, South Africa’s National Prosecuting Authority spokesman Eric Ntabazalila said.
“He raped her but she fought back. He bludgeoned her with a heavy object on the head and then locked her body up in a post office safe,” Ntabazalila said in a statement on Friday.
The 42-year-old post office worker later confessed to the crime and led police to where he dumped the body, according to prosecutors.
On Friday, a Cape Town High Court said Botha will serve a life sentence for murder and two life sentences for rape. He had pleaded guilty to the charges earlier in November.

Reacting to the sentencing, the government said Botha’s sentence would serve as a warning but many South African expressed their frustrations that the punishment was not enough to deter perpetrators of sexual violence.
For many, only the death penalty will do.
One South African woman wrote on Twitter: “As long as it’s not a death sentence, it will never be enough.”
Another said: “Nobody has a right to take a life but Botha doesn’t deserve to live after he robbed Uyinene of hers. The death sentence should be brought back. Hear our cries! A life for a life!”
A petition which has been circulating in recent months calling for the death penalty for rape and other offenses against women is gaining momentum and has garnered more than 600,000 signatures.
Mbaliyezwe Ndlela said she was sad that while the victim’s family will continue to grieve over their daughter death, her murderer would still be alive.
“Uyinene’s family will never get to see her or watch her graduate and achieve her dreams, luyanda botha should not be alive and get to live a luxury life in jail,” she said in a Twitter post.

South Africa rates of femicide– the intentional killing of women and girls–is also one of the highest globally when compared with other countries where data is available, according to Professor Rachel Jewkes, director of the What Works to Prevent Violence Against Women and Girls global program.
“We have three women killed every day by a husband or a boyfriend in South Africa, and this is much higher than in many countries. It’s much higher than it is in Europe or Australia,” she said.
South Africa recorded the fourth highest female death rate linked to violence among 183 countries — only behind Honduras, Jamaica and Lesotho, according to the World Health Organization report in 2016.
Last year, more 2,700 women and 1,000 children were killed in South Africa, and there were 30,626 rape cases between 2018 and 2019, according to the South Africa Police service.

Mrwetyana’s death sparked nationwide protests in South Africa and caught the attention of Meghan, the Duchess of Sussex,who secretly visited the post office where the student was murdered in September, while touring the country with her husband, Prince Harry.
The duchess, according to a post on the official Sussex Royal Instagram, had “closely followed the tragic story” and wanted to make the pilgrimage privately as a “personal gesture.”
Meghan, who spoke about women’s rights during her engagements in the country said the levels of violence against South African women had reached crisis level and called for a change.

As anger grew over the student’s slaying, President Cyril Ramaphosa visited Mrwetyana’s family and called an urgent meeting in parliament over gender violence in September.
“The women and children of this country are under siege. … South Africa is one of the most unsafe places in the world to be a woman, with levels of violence that are comparable to countries that are at war,” Ramaphosa said calling on lawmakers to support his government policies in tackling the scourge on women in the nation.
Ramaphosa promised to review laws on sexual offenses, make public its national sexual offenders list and carry out mass public education on gender-based violence over the next six months.
“We will use every means at the disposal of the state — from the police service to the justice system, from social development programs to our school curriculum — to strengthen all parts of our national response to gender-based violence,” Ramaphosa said.

A string of murders

Mrwetyana’s death happened in the same week that Jess Hess, a 19-year-old student, who was found dead at her suburban Cape Town home with her 85-year-old grandfather, who had also been murdered. A suspect has been arrested, according to local media.’
South African boxer Leighandre “Baby Lee” Jegels was allegedly shot dead last month by her estranged boyfriend, who later died in a hospital. Equestrian showjumper Meghan Cremer, 30, reportedly was found dead with her hands tied and a rope around her neck on a sand mine in Cape Town.
Three suspects were arrested in connection to the case in September, and one has been charged with murder, according to a local media report.