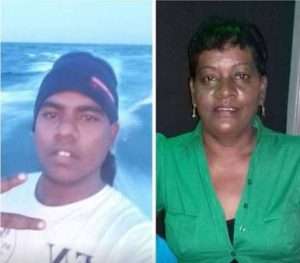 newsday.co.tt- Broken-hearted over the disappearance of her son, Shaffina Khan, 54, died on Wednesday after a stroke.

Khan’s son was among the group of fishermen fatally attacked at sea four months ago.

Relatives said Khan, a mother of eight, cried daily and hoped to get closure over the disappearance of Jason Baptiste who has never been found and is believed to be dead.

“She stopped caring for herself. She would have been glad to keep a funeral for him, but without a body it was harder. She just wanted to see him and say goodbye. He was a favourite child,” a relative said.

In the last decade, Khan survived several heart attacks and two strokes, but relatives said the loss of her son was just too much.

Her daughter Melissa Khan, in a Facebook post, said, “Two of the most important people in my life left me just months apart. If I make it through this, there is nothing that can break me in the future.”

Baptiste, 30, also called Jewel and Trevor, and his friend Justin Kissoon, 19, remained missing after armed pirates beat them, threw them overboard and stole their boats and engines in the Gulf of Paria on July 22.

Two men from Sea Lots have been charged with the five murders and the case is pending before a Couva magistrate.