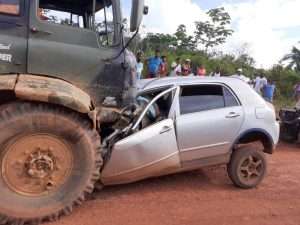 newsroom.gy- An accident involving a car and a truck in Port Kaituma, North West District resulted in the death of two persons Wednesday afternoon.

Dead is Lennox Jones, the driver of the car and Kim Cato who was in the passenger seat.

Regional Commander Senior Superintendent, Wendell Blanhum told the News Room that two cars were racing on a narrow road in Port Kaituma when one of the cars collided head-on with a truck that was coming from the opposite direction at about 14:00hrs.

According to the senior cop, the car which was being driven by Jones was going up a hill when it collided with the truck.

Both Jones and Cato died instantly.

The News Room understands that the driver of the other car is in police custody assisting with the investigation.