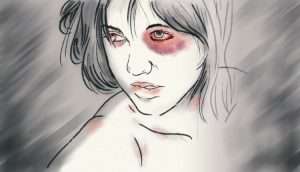 newsroom.gy- The first comprehensive national survey on gender-based violence in Guyana revealed that more than half (55%) of all women experienced at least one form of violence at the hands of their partner.

While the global estimates show that 1 in 3 women worldwide experiences either physical and/or sexual violence, mostly by an intimate partner at some point in their lives, in Guyana, this is 1 in every 2 women.

“In Guyana, 38 per cent of women [surveyed] have experienced physical and/or sexual violence, above the global average,” the report stated.

The study was conducted by the Guyana Bureau of Statistics with support from the Inter-American Development Bank (IDB), UN Women, UNDP, USAID, the Global Women’s Institute of George Washington University and the University of Guyana.

The survey was administered among 1,498 women between ages 15 to 64 in the 10 administrative regions. Half of all women who experienced intimate-partner violence never sought help, according to the report.

Victims, community members and stakeholders attributed this to lack of knowledge of available help, perceptions of being blamed or stigmatized by their situation becoming known throughout the community and inadequate support structures to ensure victim safety after reporting violence to the Police.

At Wednesday’s launch, Minister of Social Protection Amna Ally called for women to expose the perpetrators of violence.

One of the key issue highlighted is that women who witnessed violence against their mothers in childhood or have a partner who witnessed such violence are at significantly higher risk, continuing the cycle of exposure and violence through to their own children.

“Failure to address this issue also entails a significant cost for the future…one characteristic of gender-based violence is that it knows no social or economic boundaries and affects women and girls of all socio-economic backgrounds,” she noted.

Importantly, the report also captures information on the risk and consequences of violence for women, their children and families and how and to what extent they seek help and extended beyond partner-inflicted violence.

It found that 1 in 5 (or 20 per cent of) women in Guyana has experienced non-partner sexual abuse in their lifetime and 13 per cent reported experiencing this abuse before the age of 18.

“Being young is the most significant risk factor for Non-Partner Sexual Violence (NPSV), including rape, attempted rape, unwanted sexual touching and sexual harassment,” the report stated.

The 15–24 age group reported statistically higher rates of NPSV of every type.

Representative, UN Women Multi-Country-Office Caribbean, Ms. Alison McLean, said:  “UN Women, along with other UN agencies will be using the data gathered from this survey to support national efforts to prevent intimate partner violence through school-based and community-based initiatives; including working with men and boys through Batterer Prevention programs; and private sector initiatives that prevent work-related spill overs of family violence to create safe spaces at work”.

Guyana signed onto the Convention on the Elimination of all Forms of Discrimination against Women (CEDAW) and to achieving the Sustainable Development Goals (SDGs).

Contained in the report are statistics from Help and Shelter which recorded 9,966 cases of gender-based violence cases against women and girls from 1995 to 2018.

In many cases in Guyana, the women who ensure intimate partner violence are left dead or badly injured before the matter is exposed.

The UN survey found that existing violence prevention initiatives are limited in Guyana.