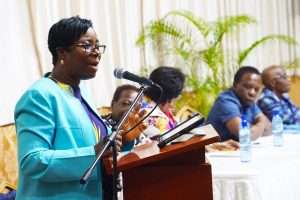 The Women of the New National Party (NNP) have laid out their plans for the continued development and empowerment of their members. The meeting held on Friday 8th November at the Grenada Trade Center was the final national meeting of the NNP for 2019 which saw all fourteen constituencies on the mainland represented by well over three hundred women of all ages. Held under the theme:

“Women Working Together To Reach a Common Goal”.

The session saw several presentations by various speakers with the work program for 2020 being outlined by Mrs. Ann David Antoine. The program includes Skills Training in specific areas for women as well as fund raising, social activities, health awareness and membership drives. These are all geared toward building capacity of the women inclusive of continued Political and Leadership sessions.

Member of Parliament for St. Andrew South West and Minister of Agriculture the Honourable Yolande Bain Horsford spoke of many areas for self-employment in the Agricultural Sector such as agro processing/manufacturing, honey production, livestock rearing, and horticultural production. She encouraged the women to grasp hold of these opportunities since they are endeavors where lots of income can be derived and even additional employment created. Minister Horsford called on the women not just to become involved but to ensure they set and maintain high standards of consistent production. This will ensure their produce can find not only a local but a regional and international market.

Member of Parliament for St. Andrew South East and Minister of Education and Information the Honourable Emmalin Pierre gave an inspirational feature address where she encouraged more women to become actively involved in front line politics. Speaking of her personal experiences since becoming involved including the challenges faced as a woman, mother and parliamentarian. Minister Pierre spoke of the many reasons women find not to be involved in politics such as character assassination and struggles such as pregnancy and maintaining a job at the same time. She encouraged the women to contribute at whatever level from the women’s group, community groups or constituency branches. Said Minister Pierre:

“Your presence here this evening is an indication that every woman in this room has skills, talents, experience and you have the power to effect change in your communities, in your home, in your country at all possible levels of our society. Not everybody will be a Minister of Government, not everybody will be a Parliamentarian but every woman has what it takes to make a difference somewhere.”

Political Leader of the New National Party Dr. the Right Honourable Keith C. Mitchell speaking to the women thanked them all for their continued support of the NNP. He congratulated them on their hard work and commitment. He stated:

“What you are doing here today is fundamental. By being here today and committing yourself to d the work and improve yourselves must continue without any stopping. What we have before us going forward is a tremendous amount of opportunities…”

The Prime Minister took some time to speak about many of the opportunities that have already or are soon to start inclusive of major tourism projects in St Patrick and St David as well as other projects in St Andrew and all other parts of Grenada, Carriacou and Petite Martinique. Many of these the Prime Minister who also holds the portfolio of Minister of Finance will reveal further during the Budget Presentation on Wednesday 20th November at the Parliament Building in Mt Wheldale.

The President of the NNP Women’s Arm Mrs. Brenda Hood said that this is one in several projects initiated by the women’s arm with an aim to engagement and empowerment of the nation’s women. She said the meeting was staged to inform the women of what was available to assist them and to let them know as well that as women they are powerful while also building on the fact that the NNP has so many women in leadership positions at this time.

The New National Party presently has nine female parliamentarians with seven (7) out of the sixteen (16) in the House of Representatives and two (2) out of the thirteen (13) in the Senate.