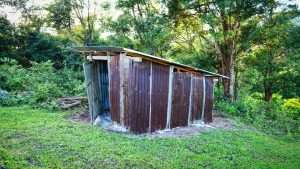 loopjamaica.com- The mother of a baby girl who was retrieved from a pit latrine in Essen Castle near Alexandria in St Ann a week ago, has been offered bail in court.

The accused, 39-year-old Athlyn Cole, was last week charged with cruelty to a child.

She appeared in the St Ann Parish Court on Monday, and was granted bail in the sum of $400,000.

Among the conditions of her bail, Cole is to undergo counselling and psychological treatment.

Additionally, she is to reside in Kingston, and should not return to St Ann except to attend court.

The case is next to be mentioned in court in January of next year.

Cole, said to be a mother of five other children, is reported to have eluded lawmen on October 30 after a brief interview with them at the scene of the discovery of her child in the latrine.

Reports are that sometime before 8pm, the police, acting on information that was received, went to a house in Essen Castle, where a baby girl was seen in a pit latrine.

The mother of the child fled the scene while the police and members or the fire department, who had been summoned, were rescuing the child.

The baby was taken to the St Ann’s Bay Hospital, where she was admitted for treatment.

Cole turned herself in to the Alexandria police last Wednesday, and was later charged.