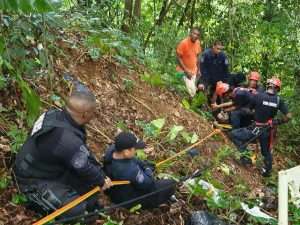 newsday.co.tt- THE San Juan man who was rescued by police after he was kidnapped and thrown over a precipice along the North Coast Road in Maraval died on Monday night.

Police said Ruben Prout, who told them he was kidnapped from his home on November 6, died at the Eric Williams Medical Sciences Complex. He had been operated on previously to reduce the swelling in his brain. He was rescued and gave police a full account of what happened.

One week later, one of his attackers – a 29-year-old man – surrendered to Sgt Sunil Bharath and other officers. He is still in custody assisting police with their investigation.

Stroude said he was kept in captivity before being thrown over the precipice. Passersby heard his screams coming from the cliff and called the police. Members of the Santa Cruz CID were called to the scene and rescued him.

Police said Stroude, who was fitted with a prosthetic leg after an accident some time ago, suffered several broken bones from the fall including a fractured skull.