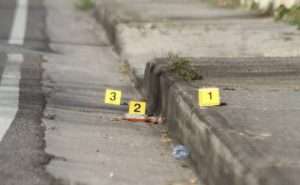 Codjoe pushed his wife out of the way of gunfire, sacrificing his own life in the process.

Newsday spoke with relatives at the Forensic Science Centre, St James, this afternoon. They said Codjoe, 33, accompanied his wife to a latrine outside their Bamboo Trace, Tunapuna, home at around 10.30 pm on Saturday.

The couple was ambushed by gunmen. Relatives said Codjoe, pushed his wife – who is seven months pregnant – out of the way, allowing himself to be shot several times.

His wife was grazed by a bullet near her right eye.

“He was very selfless.

“That’s his first child they were expecting and this came and happened.

“It is sad and we really don’t know why anyone would want to do this to him,” one relative said.

Another said his wife was traumatised by the experience and was still struggling to come to terms with Codjoe’s death.

“Right now, she is recuperating at another relative’s house. She is really traumatised and afraid to go out and move around. She is afraid to go back to that house where he (Codjoe) was killed.”