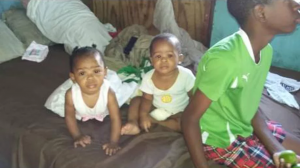 (JAMAICA GLEANER) —  A psychiatric evaluation has been ordered for the St James woman who was recently charged in connection with the deaths of her two sons, in a fire which destroyed their home in Paradise, Norwood, on November 1.

Shantel Brown, 28, who was charged with child neglect, faced the St James Parish Court on Thursday, the police have reported.

Brown, who appeared without legal representation, was remanded and ordered to return to court on November 19.

Cory Palmer revealed that the year-old baby who suffered major burns is in serious but stable condition and is being supervised by officers from the the Child Protective and Family Service Agency.

A probe is under way into how the fire started.

“So far, wi tell the police that wi believe seh is another girl inna the community, who Shantal had a fight wid, light the fire, and since the pickny dem dead, nobody don’t know weh shi gone.”

The police reported that shortly after 11 p.m., officers were patrol in the community when they saw Ms Brown and a group of persons drinking and gallivanting along the roadway.

The lawmen instructed them to go home and drove away, but about half hour later, when the officers drove back to the same location, Ms Brown and her friends had returned to the streets and were again seen drinking and carrying on.

Minutes later, a woman ran to the location and raised an alarm that Brown’s house was on fire at Ban Lane. Firefighters tried to contain the blaze the one-bedroom board dwelling house was engulfed in flamese.

When the fire was estinguished it was discovered that Ms Brown had left all four children alone inside the house, which had caught fire.

Her six-year-old Cory-Ann barely managed to escape from the blazing house while dragging her one-year-old sister.

After carrying out cooling-down operations, the firemen discovered the charred remains of eight-year-old Javanchi Palmer on a bed, as well as those of his younger brother Tyler McLeod, underneath the bed.