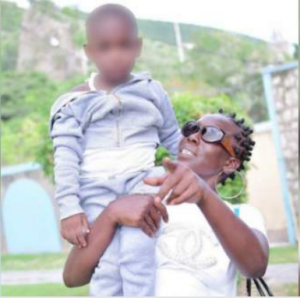 jamaicaobserver.com- THE brutal killing of 42-year-old Denise Lindsey, a vendor of an East Street address in Kingston, has left her three children and common-law husband in mourning.

According to a report from the Corporate Communications Unit of the Jamaica Constabulary Force, Lindsey was walking along East Queen Street last week Monday when she was pounced upon by an unknown assailant who shot her several times in the head.

Lindsey usually sells her wares in South Parade, downtown Kingston. She was killed while heading home with her three-year-old grandson and her teenage sons, who were pushing her trolley of goods.

When the Jamaica Observer visited Lindsey’s family last Friday, preparations were under way for a vigil to be held that evening in her honour.

According to Lindsey’s oldest child, Ticy Smith, it was only moments before the incident that she had talked with her mother on the phone.

“The same day she dead she call mi and ask mi if mi alright, because mi did sick. She call mi. Mi a wonder how she call mi so much time and a call mi if mi alright. And di last ting she say was, ‘As long as yuh alright, come mi a come home now’. Dat a di last time mi hear from mi mother,” said Ticy, who was still in shock at the loss of her mother.

“Mi cyah cry. Even when she get di eight shot them and mi go look pon her, and touch her, and say, ‘Mommy, you really gone leave mi?’ Mi still couldn’t cry. Maybe when mi see her a di funeral and see say she definitely a guh weh, mi might cry,” she added.

The mother also expressed concern about the effect that the murder would have on her son, who had just celebrated his third birthday.

Lindsey’s common-law husband Carl Smith, who is the father of her three children, was at a loss for words. He described Lindsey as devoted, and as the only breadwinner in the family.

“Before mi get injured four years aback — mi get stray shot inna mi foot — and during the four years, a she take care a mi and take care a mi youth them, all the children them. She is like mi mother and mi father. If mi find miself inna any problem, is my babymother deh deh fi mi,” said the dejected father.

“Every morning wi two son dem help her push the load go town. Di likkle one run as him hear di shot them. As them start shoot him mother, him run. She just stop in a wholesale fi buy two juice fi her grandson and when she come [out], di person a wait pon her,” he added.

Tamara Green, Lindsey’s childhood friend, could not hold back her tears as she recalled her relationship with her best friend.

“Mi feel it because a mi friend from mi a likkle girl a come up. She was a devoted friend who loyal and always deh deh fi mi. All when mi down she deh deh fi mi. A not even mi friend, a mi sister. Mi nah guh find another friend like she. She nuh deserve this,” Green lamented.

When the Observer visited the spot where Lindsey would normally set up her stall in downtown Kingston, vendors were still reeling from the news.

“Is me and her open town a morning time. She run her joke and mi always a tell her fi turn her life to Jesus. So when mi get the call I was so saddened. When I saw the picture on someone’s phone, I couldn’t believe it,” said one vendor who described Lindsey as her friend.

Another vendor, whose stall was right next to Lindsey’s, was still in disbelief.

“Is like mi still a see her, like she nuh gone. Is yesterday evening she deh here whole day,” said the woman.

Lindsey was also well-loved in her community. Residents described her as a good mother who loved her children.

“Is years mi know she a sell downtown just fi take care of her children them. She was a devoted mother. Everybody love her,” said one resident, who pointed out that she grew up with Lindsey.

Beverly Cargill, Lindsey’s godmother, was adamant that the family will be seeking justice for her senseless killing.

“We want justice for Denise. My children them and her move like bredda and sista. One a dem, all now him nuh stop cry. How Denise dead, she nuh deserve it, she shouldn’t dead like that. She was a trying mother and father, di backbone in her family,” said Cargill.

The police are still investigating.