Jamaica: Accused In Double Beheading Says Curiosity Led To Him Being Charged With Murder 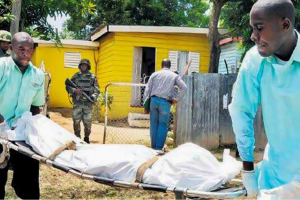 (JAMAICA OBSERVER) —   In the hours when The Queen’s School student Joeith Lynch and her mother Charmaine Rattray were screaming and fighting for their lives at their house in Lauriston, St Catherine, Sanjay Ducally — who now stands accused of murder in the gruesome death of both women — says he was on his way “from a function” in the dead of night and, on hearing the shrieks, went to investigate only to get caught up in the incident which has landed him behind bars for nine years.

The caution statement of Ducally — who on Wednesday pleaded not guilty to two counts of murder, along with co-accused Kemar Riley — was yesterday played into the records of the Supreme Court in downtown Kingston during the second day of the trial.

“On the day of the incident I was coming from a function that was supposed to be held in Lauriston. Upon reaching at the ‘bruck way’ right next to where Crystal (alias for Lynch) and her mother Joy (alias for Rattray) live, I heard some noise like someone was screaming. Upon hearing this I went to look what was going on,” Ducally said in his videotaped statement which was shown to the court.

He said when he went into the house and entered Lynch’s room he saw two men — one of whom (Roshane Goldson, who on Tuesday pleaded guilty and was charged with non-capital murder) was “busy chopping Crystal”.

“I said ‘what going on?’ He couldn’t answer because he was busy chopping Crystal so I was standing next to him and while he was chopping he swung the cutlass and it chop me on my hand. Same time I ran outside… and I jump over the back fence and run around the lane and up on Rio Cobre Drive,” stated Ducally, who is being represented by defence attorneys Anthony Williams and Julie-Ann Bailey.

According to him, it was while running away from the scene that he heard five to six gunshots fired. He was, however, more concerned about his injured hand which he wrapped with his shirt. Moments later, he said, the two men he had seen in the room approached him.

“Roshane said ‘why you come inside the room and got chop?’ and I didn’t answer him because I was in pain and wanted to see the doctor,” Ducally said, adding that he insisted on seeing a doctor and was told he could not go to the hospital but would be taken to a private doctor the next day.

According to Ducally, when he insisted that he wanted to see a doctor that night out of fear that he might lose his hand because his finger “was getting stiff”, he was taken to Kingston Public Hospital and was told to return the next day to get his hand stitched. He, however, claimed he went to a rural area next day, because a relative of his was going to visit from overseas, and ended up getting his hand stitched at Port Maria Hospital instead.

According to Ducally, a former assistant teacher, he didn’t know who else was there (at the scene of the crime) because he didn’t see them. During the videotaped account Ducally wrote fluidly under the watchful eyes of a lawyer and police investigators, yawning once and only stopping to scratch his head or rub his forehead or to find out from the officers whether he should “write everything that took place that night” or whether it was “after the incident mi muss write (about)”?

Yesterday, the bespectacled Ducally, who was observed reading a Bible prior to the start of the trial, sat quietly in the dock beside the other co-accused, Riley, observing the proceedings.

Yesterday, as well, a relative of the deceased, in a written statement read into the court’s records, indicated that she had warned Crystal in a phone call that the word was on the street that her death, along with her mother’s, had been ordered. However Rattray, who had been unemployed for two months at the time, was overheard saying she would not be leaving because she had nowhere to go.

“I don’t know why they were killed. I know a man who lived next door named Scotty was killed,” the relative said, noting that Scotty’s girlfriend, who was present at the home when he was killed, was not harmed.

Another relative, in another statement, noted that while members of the family who also lived in the area were feuding, Rattray was not involved. “She was a peacemaker… I don’t know the reason [they] met such a horrible death. I don’t know of them having any conflict with anyone,” the individual indicated.

According to the statement of another witness, the mother had been unable to even pay for her daughter’s graduation as she had no money. The day before her death a relative, in answer to Rattray’s complaint that she had no food to eat, had taken supplies to her, only to hear later that they had met a brutal end mere hours after.

Yesterday, 10 statements — including seven from witnesses who will not be taking the stand — were read into the court’s records, a move which Director of Public Prosecutions Paula Llewellyn said saved the court considerable time in the trial which is expected to last some two weeks and showed the importance of cooperation between the prosecution and the defence.

Also admitted into evidence yesterday among the 10 statements were the post-mortem report of the forensic pathologist, the ballistics expert’s report, and the DNA report.

The now 29-year-old Ducally was part of a group of five allegedly involved in the brutal massacre of Lynch and her mother during an invasion of the women’s house, supposedly on the instructions of an individual referred to as “the general” in what Lewellyn described as “murder most foul”.

“They were not merely there, they were there for a purpose — to aid and abet in the killing of the women,” the DPP said on Tuesday in leading the evidence for the prosecution.

The sentencing hearing of the other three accused is expected to take place on December 11 at 2:00 pm.