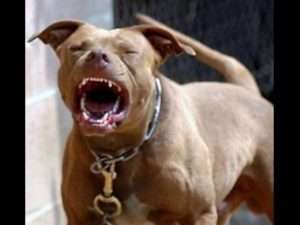 (NEW YORK POST) — A woman was mauled to death by at least one of her two pit bulls in her Michigan home, police said.

An autopsy determined that she died of “several bites made by one or more dogs that were pets,” the statement said.

Two dogs were removed from the home — and Craig Goulet, supervisor of Bay County Animal Services and Adoption Center, confirmed to MLive.com that they were pit bulls.

Goulet told the outlet he couldn’t comment on the dogs’ behavior or if they were aggressive.

Both are currently quarantined and it’s unclear what will happen to them, he said.

Tami Arnel Doubie, who identified herself on Facebook as O’Dell’s employer, remembered her fondly in a Wednesday post.

“I hired this woman about 3 weeks ago as my assistant in the parks I manage and she made quite an impression on me in a short amount of time both personally and professionally!” Doubie wrote. “She was spunky, feisty and one of the most genuine people I have met and [I] was so looking forward to working with and becoming friends with her. My thoughts and prayers are with her family as they deal with this devastating loss.”

The incident comes only days after a 4-year-old Michigan boy was fatally mauled by a pit bull that the boy’s parents were dog-sitting in a Detroit suburb.

The animal has since been euthanized.

Also on Friday, a pair of Great Danes killed an Ohio woman who kept the rescued animals over her husband’s objections.

Those dogs were also euthanized on Saturday.