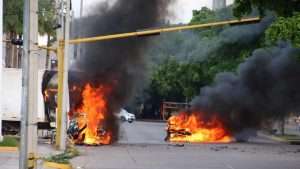 independent.co.uk- An officer believed to have been involved in the arrest of the son of Joaquin “El Chapo” Guzman has been killed in Sinaloa, the state in the grip of the drug lord’s cartel.

CCTV from the scene shows a group of armed men jumping out of a car and firing on a neighbouring vehicle at a strip mall in Culiacan – discharging more than 150 rounds in a matter of seconds before speeding away.

The officer was part of an elite group of state police assigned as an escort to undersecretary of public security for the region in Mexico.

In a statement, the force said: “The secretary of public security of the state regrets the death of a member of the state police, Eduardo, who lost his life this Wednesday in the capital of Sinaloa.”

The spokesman added they were “in solidarity with the family and friends of the fallen officer”.

Local media report he was one of the officers involved in the arrest of Ovidio Guzman Lopez, the son of El Chapo, who is currently wanted in the US on drug trafficking charges.

Guzman Lopez was apprehended by 30 members of the National Guard militarised police and army in a raid on his compound last month.

However, officers were forced to release him after members of his father’s notorious Sinaloa cartel swarmed the area.

The house where Guzman Lopez was taken was surrounded, while fighters ran through the surrounding city firing what appeared to be .50-calibre sniper rifles and machine guns while battling police and soldiers in broad daylight.

Videos published on social media showed gunmen, some wearing black ski masks over their faces, riding in the back of trucks firing mounted machine guns as vehicles and at least one petrol station burned.

Surrounded by enemies, the soldiers gave Guzman Lopez back in a capitulation that caused the government international embarrassment.

Two people were killed and a further 21 were injured in the carnage, which also saw between 20 and 30 people escape from prison.

“Decisions were made that I support, that I endorse because the situation turned very bad and lots of citizens were at risk, lots of people and it was decided to protect the life of the people,” President Andres Manuel Lopez Obrador said in a news conference at the time.

“You cannot value the life of a delinquent more than the lives of the people.”