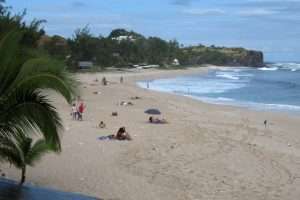 (NEW YORK POST) —  The hand of a Scottish tourist who was last seen snorkeling off the French island of Réunion, near Madagascar, was found in the stomach of a tiger shark — and he was identified by the wedding ring still on a finger.

The 44-year-old man, who has not been identified, went missing Saturday while swimming off the coast of the Indian Ocean island, according to the Guardian.

His wife identified the ring, which was recovered during an autopsy of the shark, one of five caught for research purposes on Monday and Tuesday by the Centre de Securite Requin, according to local TV channel Réunion La 1ère.

The shark was found about four miles from a lagoon where the man was last seen, the newspaper reported.

It was unclear if the man had drowned before being consumed by the shark or if the fish attacked him.

“We are providing support to the family of a British man who died while snorkeling in La Réunion and are in contact with the local authorities,” a spokesman for the Foreign and Commonwealth Office said.

Local resident Erick Quelquejeu told BBC Scotland that the man, who was believed to be vacationing with his wife in Saint-Gilles, had left her for “a few minutes” to go for a swim.

“It’s an area enclosed by a reef, there’s a very slight passage where it goes deeper into the ocean but actually it’s really well protected by the reef,” Quelquejeu said.

“His wife was really scared by what happened. Many helicopters, many planes, swimmers and boats went to try and find the guy in the ocean but couldn’t find him for a few days,” he added.

“Apparently they found a shark a few days ago with his hand so we are really not sure how it happened.”

Many beaches on the west coast of the island contain signs warning people against swimming because of shark attacks, he said, adding that there are also warnings at the airports.

“There are a lot of shark attacks on Réunion island but we are quite aware about that now,” he added.

“It’s something we don’t hide from anybody. All the places around the island where you can’t swim — where there’s not a natural reef — there are signs in front of the beach to warn people.

“Even at that you have a few boats that go around the west area of the island — because that’s where all the beaches are — to protect them, to watch if anyone makes that mistake anyway.”

There have been two fatal shark attacks this year on Réunion, where authorities have implemented a ban on swimming and water sports across almost all of the island’s beaches after attacks in 2013.

French President Emmanuel Macron recently said he would like to see water sports reintroduced by 2022, but added that he wanted “to be sure” that it would be safe to do so.

Facebook
Twitter
Pinterest
WhatsApp
Previous articleEx-stripper Jailed For Convincing Lover To Kill Fiance, Before Having Him Killed Too
Next articleGuyana: 8-Year-Old Student Hospitalized After Beating By Classmates