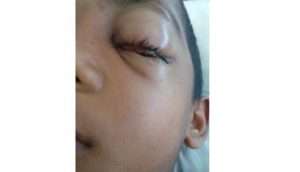 (NEWS ROOM GUYANA) — The mother of an 8-year-old student of the Mon Repos Primary School, East Coast Demerara is calling for a full investigation into an incident which has left her son in a serious condition at the Georgetown Public Hospital.

The child, Richard Boodram was reportedly beaten by five of his classmates.

The mother, Devika Persaud told the News Room that her son was struck to his head with a bottle and a piece of wood on Friday last and was admitted to the hospital after his eyes became swollen on Saturday.

“My child could’ve died. All [his] eye swell up…them hit [him] with a wood in [his] head, two of them hold [his] hands, one of them knock he with a bottle behind [his] head…they [could have killed him]” the 26-year-old woman said.

According to Persaud, her son did not tell her what happened at the school and only told the doctors about the incident when he was admitted to the hospital, but prior to that, she noticed he behaved in a strange manner and had refused to eat.

The mother claimed that her son has always been bullied by the same group of boys.

“They always bullying he. One time I went to the school and caught one of the boys who beat him vice him [with his hands around my son’s neck] and I go and talk to [the child] and say ‘you mustn’t do it again.’ But it always happening,” Persaud said.

She is calling for a full investigation into the incident and accused to the Headmistress of attempting to cover up the matter.

Efforts by the News Room to contact the Headmistress proved futile as the school’s landline phone is out of service.

The News Room then contacted the Regional Education Department and was referred to the Regional Executive Officer, Pauline Lucas who said she is unaware of the incident.