Mikey Live
HomeEx-stripper Jailed For Convincing Lover To Kill Fiance, Before Having Him Killed...
Featured

Ex-stripper Jailed For Convincing Lover To Kill Fiance, Before Having Him Killed Too 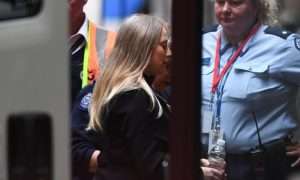 theguardian.com- A woman with Melbourne gangland links who convinced her lover to kill her fiance before having him killed too won’t get out of jail until she’s at least 71.

Robyn Lindholm will be eligible for parole in 25 years after being sentenced for the murder of her live-in partner George Templeton in 2005.

The 46-year-old woman is already serving decades behind bars for killing her “besotted” lover Wayne Amey, who she had recruited to kill Templeton.

Lindholm told Templeton’s family he went missing, before she cut off contact and moved into a penthouse with Amey.

“You were enjoying the high life at the expense of your former de facto’s life,” Justice Christopher Beale said in his sentencing remarks on Thursday.

Templeton was likely drunk and vulnerable when he was assaulted and abducted from the Reservoir home he shared with Lindholm, Beale said.

She concocted an alibi to be out of the house while Amey did her bidding.

Templeton’s body has never been found, causing profound grief for his family who have begged Lindholm to tell them where his resting place is.

“If we as a family could ask for anything, it is to know what happened to George and where his body lies,” his sister-in-law, Deborah Teazis, said at a pre-sentence hearing.

“You have the option to do what’s right … to tell us where George’s body is.”

Despite their pleas, the family still don’t have any answers and their grief is profound, Beale said. “No sentence I can impose can undo the far-reaching and terrible consequences of your crime.”

Eight years after she got Amey to kill Templeton, Lindholm arranged for him to be killed when their relationship soured.

Lindholm had been addicted to ice and living out of the car when she met Torsten Trabert who was motivated by an “obsessive lust” when he killed for her.

He ambushed Amey at a car park, bashed him with a baseball bat and threw him into a car boot before he was stabbed, strangled and dumped at a remote location.

Lindholm, reportedly the ex-girlfriend of slain gangland identity Alphonse Gangitano, is already serving a 25-year-sentence for arranging the murder of Amey, which she pleaded guilty to.

Beale jailed her for 28 years for the murder of Templeton, and her new non-parole period is 30 years.

She will be 71 when she is first eligible to apply and in her 80s when the new sentence expires.