Two more men have been detained in connection with the Carriacou drug bust on Thursday 31st November, 2019 that netted 416 kilos of cocaine.

The men, who fled the scene at the time of the police operation, are assisting with the investigations.

Meanwhile, two others, Damian Frank and Serkan Yildrim, who have since been charged reappeared at the St. George’s Magistrate’s Court on Wednesday 6th November, 2019 and were denied bail.

The men, who are back on remand at the Her Majesty’s Prisons, are scheduled to appear at the Carriacou Magistrate’s Court on November 18th 2019. 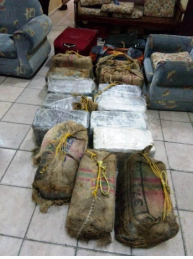