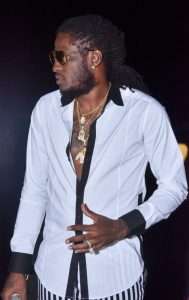 (JAMAICA OBSERVER) — Aidonia and some members of his 4th Genna Squad were involved in a motor vehicle crash in the “vicinity of Barbican” in the Corporate Area after leaving the Red Bull Culture Clash held at National Arena in Kingston on Sunday morning.

Details of the crash were not available up to press time, but the Jamaica Observer understands that a Toyota Hilux was also involved.

A source close to the camp said the dancehall deejay and crew members were okay.

“He wasn’t driving… I’m certain it was a a member of the team that was driving,” the source told the Jamaica Observer yesterday. “He’s okay, though.”

The police’s information arm, Corporate Communications Unit, has no report of the accident. The damage to the deejay’s white BMW sedan was not ascertained.

Aidonia was a member of the second-placed Strike Force crew at the Red Bull Culture Clash on Saturday night. The team lost to Do It For The Culture after they were disqualified in the tiebreaker round.

This is the second collision in which the artiste has been involved since the start of the year. In April, the deejay was driving his white Mercedes Benz AMG when he collided with another motor vehicle along Mannings Hill Road in Kingston.