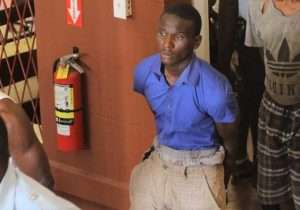 newsroom.gy- A 19-year-old father threw himself to the mercy of the court Wednesday when he pleaded guilty to the possession of an unlicensed gun and ammunition.

Shamar Plass appeared before Magistrate Faith McGusty at the Georgetown Magistrate’s Court where admitted to having the .38 pistol in his possession with three matching live rounds on November 3, 2019, at Avenue of the Republic in Georgetown.

The teenager, in his plea for leniency, told the court that he was at a shop to purchase pampers for his baby when he saw a friend.

Plass said the same friend gave him a black plastic bag to keep for him when moments later, the Police swooped down on him and found the unlicensed gun in the bag.

The young father was adamant that he had no knowledge that the firearm was in the bag.

Meanwhile, the Prosecution contended that on the day in question, the Police acted on intelligence received and arrested Plass. It is the Prosecution’s case that the illegal weapon was found in his pants.

The Magistrate will hand down sentencing on November 21 following a probation report.

Plass was remanded into Police custody.