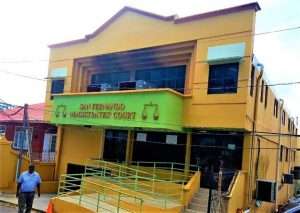 (TRINIDAD EXPRESS) —   An unemployed father of two who admitted he sold marijuana was yesterday jailed for a year.

Denesh Ramcharan, 24, was charged with possession of marijuana after it was found in the toilet area of his Gasparillo home.

San Fernando senior magistrate Jo-Anne Connor heard that at 5.50 a.m. last Friday, officers went to Ramcharan’s Bonne Aventure home and executed a search warrant. When questioned by the police, Ramcharan admitted, “I have some drugs by the toilet.” Police prosecutor Cleyon Seedan said Ramcharan pointed officers to a bag which contained a quantity of transparent and purple plastic bags and a scale. The drugs together weighed 247 grammes.

He admitted the drugs belonged to him and said that his wife and children knew nothing about it. He was charged by Constable George of the San Fernando Criminal Investigations Department.

Defence attorney Indira Binda told the court that Ramcharan was facing personal and financial issues and both used and sold the marijuana.

She said he recently relocated from one address to another, following family conflict, and there was no running water at the new location.

The attorney also said Ramcharan, who worked as a labourer and a truck driver, did not have a steady job and was the father of children ages two and six years old.

She also said that her client had three similar previous convictions.

In mitigating on his behalf, Binda said Ramcharan had pleaded guilty and had co-operated with the police.

Connor considered Ramcharan’s guilty plea which she said showed remorse but also considered the manner in which the marijuana was packaged and that Ramcharan did admit that he sold the drug.

Connor told him that he should not be supplementing his income by selling illegal drugs.

The magistrate also considered his three convictions where he was fined over a short space of time.

Ramcharan was sentenced to 12 months in prison.