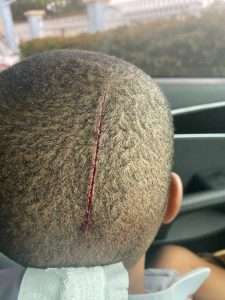 newsday.co.tt- THE Ministry of Education is investigating a report that a five-year-old pupil of the San Fernando Boys’ RC School used a blade from a sharpener to slash another five-year-old on the back of the head.

The injured child was taken to the San Fernando General Hospital, where doctors treated and later discharged him.

Reports said the incident happened earlier this week while the children were at school.

One boy was seen with a pencil sharpener, which he then broke before taking out the blade and slashing the other. The second child was cut from the top of his head almost to the base of his neck.

An official at the Education Ministry told Newsday today the incident had been reported, and a meeting was to be held at the school today between the parents, school staff and school supervisor.

A photograph showing the student’s injury was posted on social media and has since gone viral, with thousands of shares and comments.