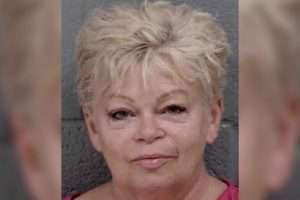 (NEW YORK POST) —  A 63-year-old veteran high school teacher in North Carolina is charged with having sex with a 17-year-old student, authorities said.

Emma Neil Ogle, of Huntersville, was arrested late Thursday after the victim 46 years her junior reported that the pair began a relationship in the spring that took an intimate turn over the summer, WSOC reports.

Ogle was taken into custody hours after the student told school staffers at Garinger High School in Charlotte about the allegations.

“I recognized her,” one senior at the school, Edward Ramon, told the station. “It’s just disgusting. It’s shocking and disgusting.”

The allegations will likely tarnish the school’s reputation, Ramon said.

“It just makes the school look bad,” he continued. “I think she should go to prison for that.”

Attempts to reach Ogle — a career and technical health occupations teacher at the school since 2014 and a district employee since 2005 — were unsuccessful early Tuesday.

Ogle has been suspended with pay following her arrest, a school district spokeswoman confirmed Tuesday to The Post.

Ogle, whose bond was set at $10,000, was released from custody on Friday, jail records show.