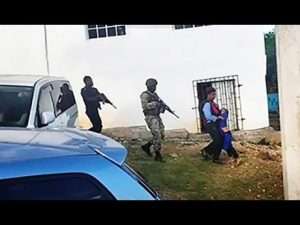 jamaica-gleaner.com- Security forces battled their way on to the Qahal Yahweh Church compound Tuesday afternoon to remove three children reportedly in need of care and protection at what has been styled as a cultic stronghold of abuse, sexual assault, and wife-swapping.

Yesterday’s was the second raid on the facility located at Lot 144 in Norwood, Montego Bay, since last Thursday and brings to six the number of minors, including a pregnant 16-year-old, extracted from the communal setting dotted with tents, huts, and unfinished buildings.

Approximately 70 followers reside under the same roof, having reportedly abandoned their homes.

Last Thursday, the church’s leaders, brothers Omar and Javaughn Thompson, and a teacher, Vera Woolery, were brought before the St James Family Court to answer charges of neglect after a mother who lived at the compound broke ranks with the group.

“When they appeared in court last week, the children were removed from their care, as the court deemed them in need of care and protection,” said the police, who have confirmed that there is an active investigation related to accusations of human trafficking, child abuse, abduction, and sexual assault.

The investigation is being led in collaboration with the Child Protection and Family Services Agency (CPFSA).

On Tuesday, the police had to call for back-up from the Jamaica Defence Force after they were attacked by enraged believers who used sticks, stones, and their hands in a failed bid to prevent the removal of three siblings, whose grandmother had made a report to the CPFSA.

“I heard my grandchildren – ages six, 13, and 14 – were being sexually molested, beaten, and being ill-treated,” said the woman, who blamed her daughter for taking her grandchildren into what she described as a cult. The grandmother’s name is being withheld by this newspaper to protect the children’s identity.

Although two of the children fought against being placed in the police car, the grandmother, who was chastised yesterday by women at the compound, was adamant that she would not leave without them. Her 37-year-old daughter chose to remain.

The police carrying out the operation were openly threatened that their own children would be raped and killed as God’s judgement.

Thompson, whose heavenly name is Mosheh, sarcastically thanked the police for raiding the premises, claiming that the operation was evidence of overreach by the security forces that would draw international outrage.

“The CDA of Jamaica and the police have been taking away our children due to allegations which they have not properly investigated,” said Thompson, referring to the CPFSA’s precursor, the Child Development Agency.

Other children were allowed to remain on the church premises.

In August, the CPFSA, in response to queries from The Gleaner, said it had received several reports of alleged abuse and confinement of a girl. That case, the child-welfare agency said, was referred to the Ministry of Education, as well as the Office of the Children’s Advocate, after it visited the compound and found no proof of abuse.

Soon after, the agency said it had received fresh allegations of child marriages via social media.

The agency said it raised concerns with the living arrangements and the group was warned to expedite the process of providing more suitable accommodation for the children.

The religious sect has been accused of using an aggressive, deliberate strategy of brainwashing members in order to extract slavish obedience – and even their wealth.