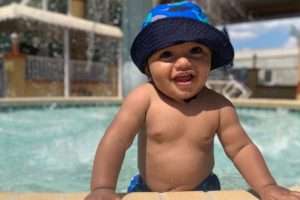 (NEW YORK POST) —  A Florida mom accused of suffocating her 10-month-old son to death raked in more than $4,000 on a fundraising page for his funeral expenses — in the months before she allegedly confessed to the cold-blooded crime, according to a new report.

Victoria Jackson, 24, was arrested for murder Friday after allegedly telling detectives that she had pressed a pillow over little Malachi’s face back in May, WFTS News reported.

She had originally called 911 on May 24 to say she found the 10-month-old unresponsive in his crib, according to the outlet. On June 1, she created a GoFundMe page for the funeral.

“I want to give my son the best memorial service I can. He died last Friday night,” the page said. “I’ve never been so heart broken in my life. Please help me take care of my baby one last time.”

The page raised more than $4,000 but was ultimately taken down sometime Saturday, GoFundMe told the station, adding that those who contributed will be refunded.

Marah Gonzales, who said she knew Jackson in high school, told WFTS she donated to the fundraiser.

“It was just kind of so manipulative to the point she was consistently reaching out, and consistently like please donate to this, and this, but with very very little details,” Gonzales said. “It’s definitely a tragedy, but it’s definitely like a sobering thing to understand things like this do happen.”

Jackson appeared in court Saturday and is being held in jail without bond, according to the report.