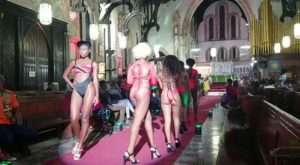 So responded chairperson of the Catholic Commission for Social Justice (CCSJ) Leela Ramdeen yesterday, as controversy rose over the modelling of skimpy beach wear during a fashion show at the Holy Trinity Anglican Cathedral on Sunday.

The event has caused shock and drawn disgust from several eminent religious spokespersons, including non-Christian leaders, who said yesterday a similar incident would not be allowed to happen in local Hindu and Muslim places of worship.

The bacchanal stemmed from a segment of one designer’s presentation during the final instalment of Style Week Trinidad and Tobago, which was working with the church to raise funds for repairs mostly due to damage from August 2018’s 6.9 magnitude earthquake.

Ramdeen, who admitted to being very upset over the incident, said in a telephone interview that the excessive showing of skin would not have been approved by the central figure of Christianity, Jesus Christ.

She further suggested that any money raised by the event should be returned by the church.

“If they raised $5 million because of that, I would give it back,” Ramdeen said.

Ramdeen said she noted that the incident would not have happened in a temple or mosque and was disturbed that it was allowed to happen by a member of the Christian community.

She said she did not wish to be critical of another church but pointed out that the Christian faith carries the largest number of followers in T&T, including Anglicans and Catholics.

“It is a total disrespect of a sacred space and the religion,” Ramdeen said.

She said she had noted arguments from some that this country was backward and needed to “grow up”.

“We are not growing up, we are making retrograde steps,” she said, adding that the need to show respect for a sacred space should not have to be taught.

Ramdeen recalled that Carnival mas band, K2K Alliance, recently held its launch at the All Saints Anglican Church at the Queen’s Park Savannah and that the presentation had been appropriate and beautiful.

“God didn’t say don’t dance or don’t play mas but what we saw was a disrespectful parade in a sacred space,” Ramdeen said, adding that she was unperturbed by anyone calling her “a prude”.

Ramdeen said local society is in a state of disrepair because of a lack of values and called on faith communities to lead the way.

She said Christians, especially, should take this lead but now “other faiths are looking on”.

Ramdeen said reports had suggested that a person placed in charge of the show by the church had left the event before the beachwear showing. She said allowing a fashion show to take place unsupervised and “knowing our Carnival people” was “a total recipe for disaster”.

Head of the Sanatan Dharma Maha Sabha (SDMS), Satnarayan Maharaj, said yesterday that a fashion show would not have been allowed at a Hindu temple “in the first place”.

Maharaj, via telephone, weighed in that other faiths have differing values, as was their prerogative.

“The Hindu view is that a mandir or church is a place of prayers and not a fashion house,” Maharaj said.

“We will not permit a fashion show in a mandir.”

“We can’t prescribe the behaviour of other churches but a mandir is a place where people come to worship and not display the body parts that should be covered. The dress code in a mandir is a lot more severe, men and women have to be very conservative.”

Contacted for his view, head of the New Islam Masjid in El Socorro, Imam Sheraz Ali, described the event as “unfortunate”.

“It was very distasteful that the sanctity of the church would be desecrated by that type of activity,” Ali said.

He said all major religions promote modesty of dress and behaviour and while people were free to dress as they wish in everyday life, “we must respect the conventions of various institutions including the church”.

“You wouldn’t go to court dressed anyhow,” he said.

Ali said the incident was indicative of society’s nosedive and cited a degeneration of behaviour at Carnival time.