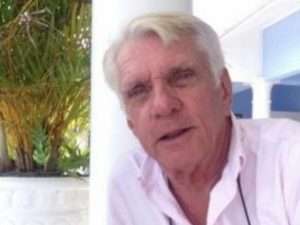 (JAMAICA GLEANER) — Jamaican hotelier, Peter Morrow, one of the two persons who died in a plane crash in Ocala, Florida last Thursday, has been described as an avid pilot and as someone who was passionate about tourism.

Morrow, who jointly-owned the Jamaica Inn Hotel in Ocho Rios, St Ann with his brother Eric, was reportedly killed on impact when the aircraft crashed while trying to make an emergency landing near an outdoor shopping mall in north Florida.

Reports are that the plane also struck a sports utility vehicle, injuring the driver.

Reflecting on his brother, Eric stated that Peter’s greatest love was flying, noting that he got his pilot’s licence at the age of 15, way before he obtained a driver’s licence.

“He literally flew every day that he possibly could and would think nothing of flying somewhere for a cup of coffee or lunch,” said Eric.

Morrow first came to Jamaica as a very young boy when his father Charles built and opened one of Montego Bay’s signature resort the Montego Beach Hotel in the early 50s.

“He enjoyed running up and down the halls knocking on guest room doors which of course irritated his father and the guests. As a teenager, he loved spending time over the holidays at the Montego Beach where there were always plenty of young ladies on holiday as well,” quipped the younger Morrow.

Peter’s hotel career started in the 1960s, soon after he completed his studies in London and Paris.

He later went into business with Eric and they subsequently took over operation of the Jamaica Inn property in the 1980 after their father retired.

He said Peter took great pleasure in meeting guests and talking to them about life, philosophy, and politics.

“He sat in the same chair every day where he could observe all the comings and goings and keep a sharp eye on the staff to ensure that they delivered the very best service possible while at the same time enjoying their jobs and taking great pride in working at the Inn,” said Eric.