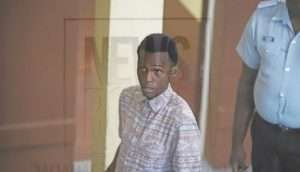 (NEWS ROOM GUYANA) — An 18-year-old resident of ‘D’ Field Sophia was on Monday remanded to prison by Magistrate Sherdel Isaacs-Marcus for armed robbery.

The teen, Shannon Joseph, pleaded not guilty to the charge which alleged that on October 12, 2019, at Charlotte and Oronoque Streets, Georgetown while being armed with a knife, he robbed Kennedy Singh of a cell phone valued $35,000 and $25,000 cash.

Police Prosecutor Quinn Harris told the court that on the day in question, Joseph was on a bicycle and approached Singh under the pretense of asking for directions when he pulled out a knife and relieved Singh of items mentioned in the charge. He then escaped on his bicycle.

On November 1, Joseph went back to the same location in search of a job. Singh, who worked at the same business place, identified him and called the Police.

Prosecutor Harris objected to bail being granted to Joseph based on the seriousness of the charge.

Joseph was remanded to prison until November 18, 2019.