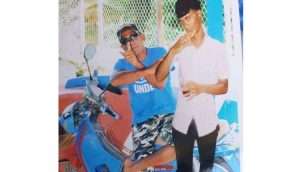 (NEWS ROOM GUYANA) —  A car that that was involved in an accident that killed an Onderneeming man Monday night, months after his teenage son was also killed in a hit and run accident, has been destroyed in a fire, heightening tensions on the Essequibo Coast.

He had gone to a wedding at nearby Adventure and was reportedly heading home when he was struck down at around 21:00 hrs. Residents said the driver was drunk and abandoned the car and fled the scene.

The car was seen on fire shortly after Anuage was taken to the hospital. It is unclear how the fire started.

Anuage’s son Ravendra, 19, was also killed by a drunk driver in a hit and run accident in January this year.

The News Room will bring further details as events unfold.