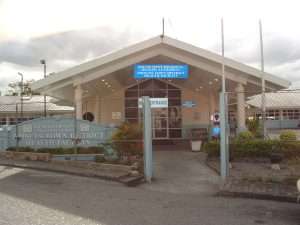 (TRINIDAD EXPRESS) —  Police have launched a manhunt for a man wearing a hospital gown who pushed down a police officer and escaped custody at the Princes Town Health Centre yesterday.

The 26 year old Barrackpore man got past two police constables and ran through the gates of the health centre past security officers in a bid for freedom. The incident occurred around 9.30 a.m. and up to mid-afternoon he was not found, police said.

Police said beneath the gown the man was wore a red tee shirt and a plaid short pants.

The man was detained by police in connection with the disappearance of a 15 year old girl on Wednesday.

The Barrackpore teen was dressed in her school uniform and was last seen walking along Poui Trace, Moruga at nightfall.

On Wednesday morning she was picked up by a man driving a Nissan Almera outside a secondary school in Barrackpore at around 7.50 a.m.

Police officers tracked the vehicle to St Mary’s Village, Moruga, but the driver drove into a forested area and abandoned the vehicle.

The 15 year old girl, of Lengua Road, Barrackpore, was found by police officers in Siparia on Thursday night and reunited with her parents.

She was taken for medical treatment and went home with her parents.

Yesterday morning the girl and her parents were interviewed by officers of the Child Protection Unit.