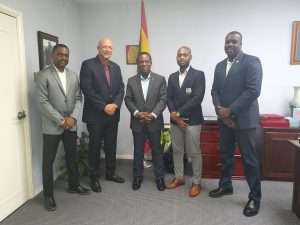 Prime Minister, Dr. the Right Honourable Keith Mitchell, met recently with representatives from West Indies Cricket Board (WICB), who brought him up to date on developments since the board’s election in March.

WICB President, Ricky Skerritt said the new board has been making tremendous strides in improving various facets of its operations.

Mr. Skerritt cited a number of areas where improvements are visible. These include the repayment of debt; curbing waste and abuse in the procurement process; down- sizing staff and ensuring structures and systems that illustrate transparency and accountability.

The WICB President told the Prime Minister, “The message is clear; the WICB cannot demand excellence from players without delivering excellence in the board room. Therefore, we are committed to empowering the executive mangers so that they are encouraged to use initiative and innovation to get the job done.”

WICB Vice-President, Dr. Kishore Shallow, in his operational update, reported that a new selection policy has been adopted by the board.

Dr. Shallow said, “Different panels have been established for male, female and youth cricket and we have a selection analyst who sits with the panels to provide statistics. The good news is, we are already seeing improvements in performance. We are not going to win every match but what we are doing now constitutes a fundamental building block for West Indies cricket.”

The Prime Minister welcomed the updates provided and commended the board for its new approach to West Indies cricket. He said, “The world today is different; we cannot have the same mindset and expect better results. It is important to adopt new practices and evolve with time. It is also important for fans to see the outcomes being derived from the changes in administrative and operational procedures.”

Dr. Mitchell also suggested that the WICB pay close attention to other facets of the players’ development. He said, “It is not just about their physical talent and fitness level; the mindset of players is also critical. A very talented player who does not have the right mindset will not have the same level of success as a player who has the benefit of all-round development.”