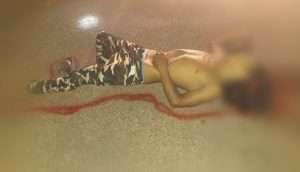 newsroom.gy- Police are investigating the circumstances under which an 18-year-old died after he was found in a pool of blood in the center of the Aranaputa public road, North Rupununi, Region 9 in the wee hours of Sunday after celebrating his birthday.

Dead is Dallon Francis, a farmer of Rupertee Village, North Rupununi. The News Room understands that Francis was imbibing alcohol with his parents at a bar in Aranaputa Valley in honour of his 18th birthday.

At midnight, the bar attendant closed the business place and left Francis there, however between 01:00hrs and 02:00hrs Sunday, a resident of Lethem was driving on the Aranaputa public road when he saw a body in the center of the road in a pool of blood and appeared to be motionless.

The News Room understands that Police observed a wound to the left side of Francis’ head.

The body is at the Lethem Public Hospital mortuary awaiting a post mortem examination.