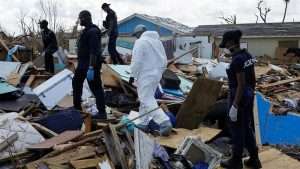 Earlier this month, Campbell told Parliament that 1,208 people were missing, based on records in the Ministry of Social Services, and promised to release a list of those missing in the local newspapers.

However, that process was halted by Health Minister Dr Duane Sands who said the police have responsibility for dealing with missing persons.

“This is disappointingly slow, but I think it’s very important to get it right,” said Sands, who weighed in on the matter on Wednesday.

According to Sands, he is not yet comfortable with the information accumulated by his ministry on autopsies done for victims of Hurricane Dorian and therefore, would not be releasing this information to the public at this time.

“I would have given an undertaking that we were going to reveal the information as it relates to autopsy identifications and so on and so forth; even as of this morning I am not satisfied that the information that I’ve gotten from my ministry is adequate to be publicly released,” he said.

“As for families seeking closure – we would like to be able to help them get closure but you can only get closure using the methods that are scientifically available and using international best practices. So if you talk about DNA, we are now investigating means of getting DNA data sooner than is conventionally available and when you are talking about DNA analysis of bone or DNA analysis of soft tissue, the accuracy of that requires that that study be done by a reputable lab in a reputable environment and those results cross checked and validated. It’s not something that you just snap your finger and it’s done. We want closure as much as everyone else does and we are working very very hard to see to it that people get that closure.”

On September 11, NEMA said 2,500 were reported missing following the storm.

That dropped to 1,300 on September 12. During his address to the United Nations General Assembly on September 27, Prime Minister Dr Hubert Minnis said the number of people still missing was about 600. However, the number to date now stands at 282, while the official death count from the storm is 67.