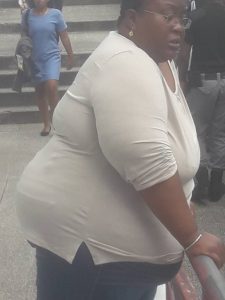 newsday.co.tt- A WOMAN pleaded guilty on Tuesday to a charge of cruelty to a one-year-old child whose body was burnt with cigarette butts.

Jillian Noel, 49, of Pepper Village, Fyzabad, will know her fate on November 25 when Justice Kathy Ann Waterman-Latchoo will pass sentence. The child, born in 2006, suffered such physical abuse that he had to be taken to hospital for treatment.

Noel stood in the dock on Tuesday in the San Fernando High Court while state attorney Kateisha Ambrose told Waterman-Latchoo about the boy’s physical abuse. His leg was broken, she said, and he was a picture of sadness– not jolly like children his age are supposed to be.

When he was four months old, the boy lived at Ferndean’s Place Children’s Home in Point Fortin. On September 15, 2007, Noel took him to live with her.

But in May 2008, someone noticed that the boy was limping, dragging his feet and had a burn on his index finger. Ambrose told the judge that when Noel was told about it, she said the boy was playing by the stove with his brother and he broke a leg.

Three months later, Ambrose said, a female worker from the home visited and saw scars on the boy’s body. There were bruises on the arms, legs, back, face and mouth.

Not long after, a friend took the boy to a fun day activity, Ambrose continued, but noticed that he was withdrawn and sad. The police were called in and PC Karl Taylor of the Community Police Unit at the Penal station, took the boy back to the home.

In July, WPCs Worrel and Skeete took the boy to Dr Nicholas Benny Okwee in La Romaine. Ambrose read the doctor’s findings to the court.

“There were scratches and scars on the angle of the mouth. The right arm was swollen around the elbow joint. There was also swelling and blue discolouration of the right hand and it was very painful.” The doctor found there were other injuries to the child’s private parts.

Noel was charged with the offence of cruelty to a child.

Attorney Martin Joseph made a plea in mitigation for her. The judge released Noel on continuing bail to return for sentencing.

Under the Children’s Act, the offence carries a penalty of two years in jail and a fine of $10,000.