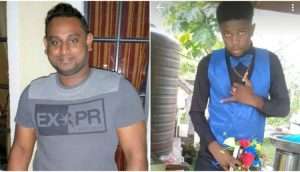 newsroom.gy-Two months after 18-year-old Bariel Hall died from injuries he suffered in a hit-and-run accident along Regent Street and Avenue of the Republic, Georgetown, a 30-year-old man was charged for causing his death.

Dinesh Dhanraj, an employee attached to Rubis, appeared before the Chief Magistrate Ann McLennan Wednesday and pleaded not guilty to the charge of causing death by dangerous driving.

With no objection raised by Police Prosecutor Neville Jeffers, Dhanraj was released on $500,000 bail with the condition that he reports to the Brickdam Police Station weekly.

The Chief Magistrate also suspended his driver’s licence and the matter was adjourned until November 14, 2019.

The News Room had reported that teen was out at a Carnival party with a group of friends on May 25 and while on his way home, he was struck down by a silver motor car on the pedestrian crossing.

The driver fled the scene but was later arrested and placed on $100,000 station bail.

Hall was rushed to the Georgetown Public hospital by the Guyana Fire Service in an unconscious state.  The teen never regained consciousness and died on August 5.