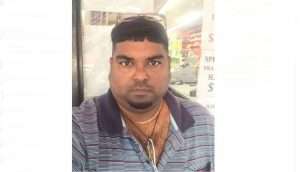 newsroom.gy- A 28-year-old electrician was on Thursday charged with the murder of his cousin, Arvin ‘Krishna’ Dipchand of Dutch Four, East Coast Demerara (ECD).

Dipchand, a 35-year-old father of one, died on October 23 after he was brutally beaten with a hammer and a piece of wood by Nandalall.

The incident occurred at around 18:00hrs at Second Street, Unity, ECD.

At the time of the incident Dipchand was visiting his 11-year-old son, who lives with his mother –Dipchand’s ex-wife –at Unity.

Nandalall who was recently released from prison, reportedly approached Dipchand on the street and dealt him several lashes to the head and two cuffs to the face.

Dipchand attempted to drive away from the scene but collapsed a short distance away. He was rushed to the Mahaicony Cottage Hospital by Community Policing Group members; he was pronounced dead on arrival.

According to the police, the two men have had a history of misunderstandings.