NNP Women’s Arm On The Move Against Child Sexual Offences 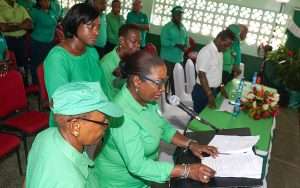 The Women’s Arm of the New National Party is moving forward with its program of activities to address the issues of Child Sexual Abuse and Violence particularly against women. On Sunday at the Convention of the NNP which took place at the Mc Donald College in the Northern Parish of St. Patrick, the Women’s Arm of the NNP put forward a resolution on the issue calling for immediate action among other suggestions. The Resolution, which was unanimously passed by the Convention of the New National Party states:

On sexual offences against the child

Recognising that our children are the most vulnerable members of our society and by virtue thereof are susceptible to mistreatment, manipulation, exploitation and abuse;

Reaffirming the importance of cultivating a healthy, safe environment in which our children can thrive and become upstanding contributing adult members of society;

Recognising that children’s rights are human rights and that the same fundamental rights and freedoms guaranteed to every citizen by our constitution are also guaranteed to children, not the least of which is the right to life, liberty, the security of the person and the protection of the law;

Empathising with the plight of child victims of sexual abuse, their affected families and those who seek justice on their behalves;

Recognising that the sexual abuse of children is a scourge on our society and on humanity and must not be tolerated or treated lightly whatsoever, and must be addressed through public education and immediate, stringent reform in the administration of justice, among other measures;

Acknowledging the Minister and Ministry of Social Development, the Commissioner of Police and the Royal Grenada Police Force, the Director of Public Prosecution and the Ministry of Legal Affairs for their continued diligence and commitment in ensuring that perpetrators are brought to justice;

NOW THEREFORE this New National Party, at its Convention being held today, Sunday 27th of October 2019, at MacDonald College, in the parish of Saint Patrick:

The Women’s Arm have also planned in conjunction with several other organizations inclusive of the Grenada Organization of Women (GNOW) a non political, non partisan march on the issue of Child Sexual Abuse for Wednesday 31st of October starting at 11.00am from the Keep Left/La Qua Round About through the town of St. George and ending over at the Roy St. John Playing Field.  There is also a march planned for the town of Grenville on Friday of this week.

President of the NNP Women’s Arm Mrs. Brenda Hood urged everyone who can, to come out in support and solidarity with all of the organizations and individuals working toward the elimination of child sexual abuse.  The NNP Women’s Arm also have planned several other Educational and Empowerment issues in communities across the island to address the issue as well as focusing at the same time with the empowerment of women.