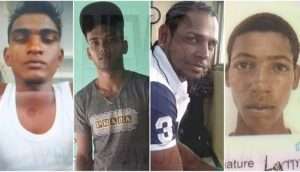 (NEWS ROOM GUYANA) –Two men have confessed to their involvement in the deadly piracy attack which claimed the lives of four young fishermen between October 3 and 5, 2019.

The News Room was reliably informed that based on legal advice received, the duo is expected to face charges in a Berbice Magistrate Court Wednesday.

The suspects are said to be between the ages of 24 and 30.

Sources close the investigation said the men were arrested on Friday last at Belvedere Corentyne Berbice and after intense grilling, they revealed that three men attacked, beat, chopped, bound and then dumped the fishermen overboard after forcing them to hand over their small catch of fish.

The fishermen were only two days into their fishing trip when the tragedy occurred.

The investigation is still active and the Police are currently seeking the whereabouts of the three remaining suspects who committed the gruesome act.

It is alleged that the incident occurred on high seas between Number 58 and 53 Villages.

Kissoon’s and Petrie’s decomposed bodies were discovered on the Abary, Region 5 (Mahaica –Berbice) Foreshore with theor hands and feet tied.

Still missing are Seeram and Tamessar. The News Room has reported that the men departed the Number 65 Village Wharf for a fishing trip to Suriname on October 5 and were scheduled to return in 14 days.

But the boat was found abandoned on October 11 at the Wellington Park Foreshore in East Berbice Corentyne with bloodstains; the engine and a piece of seine were missing.