Guyana: Doctor, Mother Of 2 Among 8 Charged For Murdering Gold Miner 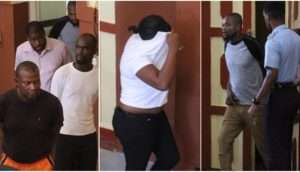 (NEWS ROOM GUYANA) –In the presence of a packed courtroom, eight persons appeared before Chief Magistrate Ann McLennan charged in connection with the murder of gold miner, Deon Stoll who was gunned in front of the El Dorado Trading establishment at DaSilva Street, Newtown Kitty Georgetown on October 14.

Odessa St. Hill, a 37-year-old mother of two and graphic artist of Delph Street, Campbellville; Dr Alonzo Dos Santos, a 33-year-old medical doctor and a second lieutenant in the Guyana Defence Force (GDF), who lives at Prospect, E.B.D; Duncan Vanveild, 36-year-old welder of ‘B’ Field Sophia and Keith Mc Kenzie, a taxi driver of East La Penitence were jointly charged with accessory after the fact.

They were not required to plead to the charge. Defence lawyer, Latchmie Rahamat who is representing Odessa argued for bail and noted that the accessory after the fact offense is a bailable one. Rahamat also noted that her client was told by ranks of the Major Crimes Unit that she would have appeared as a witness for the State while Eusi Anderson, the lawyer representing Dr Alonzo Dos Santos said his client was also told the same thing.

Morgan and Wayne St. Hill were represented by attorney-at-law Adrian Thompson in association with Ravindra Mohabir while Sankar was represented by Clevaun Humphre, and Rollox was unrepresented.

The prosecutor further contended that during the course of the robbery/murder, Morgan was shot.

It is alleged that Odessa took Dr Dos Santos to Vanveild’s home to treat Morgan for his bullet wound. McKenzie was reportedly the driver of the motor car which was intercepted at a roadblock on the Cove and John Public Road, East Coast Demerara (ECD).

The court heard that Morgan was a passenger of the vehicle and was attempting to flee the jurisdiction on October 22, 2019.

Meanwhile, it is alleged that Rollox was the getaway driver, Morgan was the shooter and his cousin Wayne St. Hill was an accomplice.

Stoll of Essequibo Coast and Barima Avenue, Bel Air, Georgetown succumbed at the Georgetown Public Hospital shortly after engaging in a shootout with the bandits.