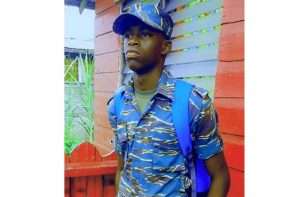 newsroom.gy- A 17-year-old boy of Tucville Squatting Area, Georgetown was remanded to the Juvenile Holding Centre Tuesday until November 18 after he was charged with the murder of a Guyana Defence Force (GDF) Soldier.

Police Headquarters revealed that the teenager appeared before Magistrate Delon Bess at the Georgetown Magistrate’s Court and was not required to plead to the indictable charged with alleged that he murdered 18-year-old Olijah Chesney during the course of a robbery on October 14, 2019.

Chesney of Lot 562 D Field Sophia, Greater Georgetown, was shot and killed by person or persons unknown at about 11:50hrs; his body was found in Tucville.

Chesney was found clad in white t-shirt, black pants and blue hoodie along with a white hat.

The News Room understands that a female who was nearby heard a gunshot shortly before the body was discovered.