US Teen Contributes To Another School In Jamaica 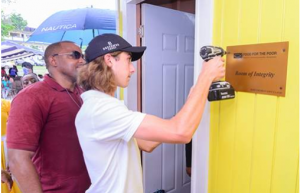 Rafe Cochran, 14, a ninth-grader at Oxbridge Academy in West Palm Beach, was excited to be back in Jamaica for the dedication of the new buildings.

According to a recent release, the much-needed spaces were the result of the Fourth Annual Rafe Cochran Golf Classic, a fund-raising golf tournament at Banyan Cay Resort & Golf in West Palm Beach in April.

“It is so rewarding to see this project come to life,” Rafe said. “My inspiration to help people in Haiti and Jamaica started in third grade, when my class visited Food For the Poor in Coconut Creek, Florida. On that visit, I was so devastated by the stories and pictures of so many children in need. I knew I had to help. I was motivated to use my platform as a golfer to raise money.”

The release said Rafe is committed to the sport, picking up his first set of golf clubs at the age of six. At 9, he became one of Food For the Poor’s youngest donors.

When he was 11, he started the Rafe Cochran Golf Classic, using his talents on the course to raise awareness and money to help others in need. Since the first golf tournament in 2016, Rafe has built 10 homes in Haiti and contributed to the building of three schools in Jamaica through Food For the Poor.

“His heart’s desire is to ensure that others have the same opportunities that he has been given, including education and a safe place to live,” Food For The Poor Senior Field Representative Delane Bailey-Herd said. “I admire his parents. They have supported and stood by Rafe every single step of the way.”

Bailey-Herd accompanied Rafe and his parents, Jay and Diahann Cochran, to Jamaica. When they arrived for the ribbon-cutting ceremony at Iona High School, they were greeted by hundreds of students, staff and local officials who wanted to meet the young man.

“I would like to congratulate Rafe for being a conduit of the Lord, because He has used you in ways that you wouldn’t even understand,” Robert Montague, minister of transport and mining and Member of Parliament St Mary Western is quoted as saying in the release. “You have not only affected Iona High School, you have affected the whole island of Jamaica.”

Rafe dedicated the buildings at Iona High to his parents, for their support; and to his grandparents, for their wisdom. He named each classroom with a trait he believes everyone should aspire to have – motivation, integrity, compassion, kindness, endurance, confidence, and respect.
The release said the outpouring of gratitude at the ceremony was a moving experience for the Cochrans, who also helped to paint one of the buildings.

“Rafe is taking us on this journey with him, and this trip was really wonderful,” Diahann said. “No matter what you do in life, you’re not going to enjoy doing it unless you experience it from the ground up. You have to be a part of it and meet the people you are helping.”

Rafe also presented the students with backpacks and school supplies. He encouraged fellow teens at the school to find their own ways of giving back, and make their own impact.

While in Jamaica, the Cochrans visited Chester Primary and Infant School in St Ann, where Rafe funded a building for three to five year olds, two years ago. They also visited Runaway Bay All-Age School, a school Rafe built to accommodate staff and more than 400 students last year.

“The word ‘pride’ doesn’t even begin to capture how the Cochrans must feel about all the accomplishments of their son, who’s barely a teen,” Food For The Poor Executive Director Angel Aloma said. “We are honoured that Rafe has made Food For The Poor his charity choice.”