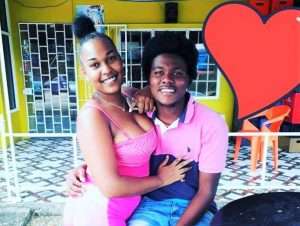 trinidadexpress.com- A year after her boyfriend was gunned down, Melissa Cain was shot and killed by a man dressed in camouflage.

The killer stepped out of the bushes and shot her as she walked along the road with her companion in Arima shortly after midnight.

Cain, 20, Thonos Lane, KP Lands, Valencia, died at the scene. She was shot in the head.

Her companion Raphael Brooks, was shot in the leg. He is being treated at hospital.

The shooting happened at around 12.15a.m at John Lane, Mt Zion, Arima.

Cain had just left the wake of Kevin ‘Pencil” Lochin, 27, who had been shot and killed on Thursday night near his home at Punette Avenue, Arima.

Three other people were wounded in that attack.

Cain and Brooks were walking along near her home when the killer began shooting.

The couple ran. Cain died at a house nearby.

Brooks, who was hit in the leg, is being treated at hospital.

Cain was in a relationship with Enrique “Bread” Lochin who was gunned down along with another man in November 2018 at Pinto Road, Arima.

On her Facebook page, she had posted several images of Enrique Lochin, a suspected gangster, declaring her undying love for him.