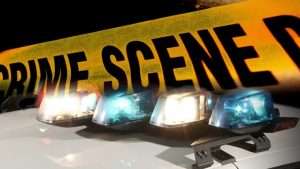 (JAMAICA GLEANER) — The St Andrew South police are hunting for a man in connection with the mob killing of a motorist on Ricketts Crescent in Kingston 13 on Thursday afternoon during heavy showers.

The dead man, 30-year-old Okeef Sewell of a Chisholm Avenue address, is accused of splashing a pedestrian before being stabbed and beaten to death by residents.

Reports are that about 5:50 p.m., Sewell was manoeuvring a forklift when he allegedly splashed a resident along Ricketts Crescent.

Sewell stopped after he was hit by an object thrown by a resident, The Gleaner understands.

During a dispute, Sewell was set upon by other residents, some stabbing him in his back. While floored, they threw building blocks on Sewell’s head.

He was pronounced dead at the Kingston Public Hospital.

The St Andrew South police have listed a man known as ‘Andre’, or ‘Conman’ as a person of interest in the incident.

They are encouraging him to turn himself over to the Hunts Bay police immediately for questioning.

Damion Hutchinson, director of the Peace Management Initiative, says his agency was alarmed at the penchant for jungle justice across the island.

“We are concerned about the psychological impact on the community. Just like the Sterling Castle incident, we did extensive work because that killing took place in front of young children. It (Thursday’s incident) may be something we choose to look at.”