US: Cop Resigns After Slamming 11-Y-O Girl Onto Ground For ‘Taking Too Much Milk’ 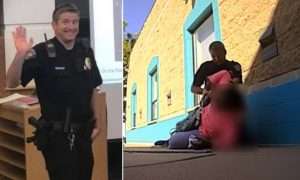 (NEW YORK POST) — A New Mexico cop has resigned after being caught on camera slamming a sobbing schoolgirl to the ground — during a fight sparked by her taking too much milk from the cafeteria.

Shocking footage shows officer Zachary Christensen violently grappling with the 11-year-old middle school girl in Farmington as she cried and begged him to stop.

Christensen later said he tried to arrest her because she “took more milk than she was supposed to” and threw some on the ground, according to KOB.

His bodycam footage released by Farmington police showed the girl initially calmly pleading with a male school employee to be allowed to leave, brushing against his arm as she walked through the doors.

Christensen marched out after the girl — yanking off her bag as he yelled repeatedly, “You’re done!”

Another camera angle showed him pushing the girl into a wall — then lifting her left leg to slam her to the ground as she cried and begged him to “get off of me.”

“Do not resist!” the officer screamed at the girl as he continued to wrestle with her, at one point seemingly pushing the side of her head into the ground as her sobs intensified, with her crying, “You’re hurting me!”

The school employee then warned him he was using “excessive force,” with the officer eventually calming down.

Farmington police announced Sunday that Christensen stepped down after an internal use-of-force investigation was launched.

The case has also been referred to the New Mexico State Police for possible criminal charges.

“That’s not our standards. That’s not who we are,” Farmington Police Chief Steven Hebbe told KOB.

Farmington Municipal Schools spokesperson Renee Lucero said the school district “extends its apologies to the student and family involved in this unfortunate incident.”

Attorney Mark Curnutt, representing the girl and her mother, says the video shows the pupil did not commit any crimes justifying arrest.

“She’s an 11-year-old girl and it’s a shock to the system to see that this is a thing that can occur at a school by a certified peace officer,” Curnutt said.

It was not known if Christensen has an attorney. No phone number for Christensen was listed.