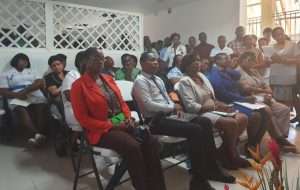 Prime Minister, Dr. the Right Honourable Keith Mitchell, has commended workers in the health care sector for their ongoing sacrifices.

Engaging with workers Monday afternoon in a meeting at the General Hospital that lasted 2.5 hours, Dr. Mitchell applauded the general level of care delivered by health professionals and acknowledged the personal sacrifices made by many.

He called on the workers to be their brother’s keeper and call out colleagues who contribute to the negative public perception of health care in Grenada. “We have a lot of honest, hardworking people but we also have some characters and if we don’t take them to task, we will have a serious problem. The persons responsible for managing the system must take some firm decisions. Leadership is not about being popular; some decisions will negatively affect people but if they are in the best interest of the majority, then they are the right decisions.”

Dr. Mitchell also cited the need for a change in the management structure of the health sector. He said, “It is clear that the management system must be changed. When there are problems, the first place to look is at the top. As Prime Minister and head of Government, when something goes wrong, I look at myself first. Persons have a tendency to blame everybody else; we will not make improvements if we do not look at ourselves critically and consider what more can be done to make the situation better. It’s not always about working harder, sometimes it’s about using a different approach”

The attrition of health care workers is one of the biggest problems facing the sector. It is estimated that about 45 persons have left the system since July 2018. The workers present had several recommendations on how to stem the departure of their colleagues, including increased remuneration, extending the contract period, upgrading equipment and improving working conditions.

The lack of equipment in some areas and the need to upgrade existing equipment were also major talking points.

Prime Minister welcomed the suggestions by staff for making improvements to the delivery of health care but acknowledged the importance of the human factor. He said, “The staffing is important; you can have the best facility but if you don’t have the right people, you will still be in trouble.”

Dr. Mitchell reiterated the need for a collaborative approach to making improvements in the health sector and he reaffirmed Government’s commitment to working in partnership.