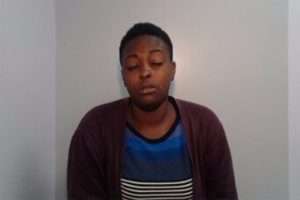 manchestereveningnews.co.uk- A mother who was paid £1,300 in the Caribbean to smuggle more than £170,000-worth of cocaine into the UK has been jailed for three years – condemning her to live more than 4,000 miles away from her young daughter.

Chantel Fullerton, 27, agreed to act as a drugs mule after losing her job as a carer on the island of Grenada.

She was arrested in August after a drug sniffer dog detected the white powder in her luggage as she arrived at Manchester Airport.

Immigration officers searched her cases and discovered four packages sewn into the corners – and three further packages in the base. The 2kg haul had a street value of £171,000.

Fullerton denied knowing about the drugs, claiming she had travelled to the UK to attend the Notting Hill Carnival in London.

But investigators found a hand written note in her pocket saying a woman had paid her £1,386 and there was a further receipt of £1,200 for the flights.

At Manchester’s Minshull Street Crown Court, Fullerton who has been incarcerated at Styal women’s prison in Cheshire, pleaded guilty to the importation of class A drugs.

Her six-year-old daughter is currently being cared for by her sister in Grenada.

Prosecutor Miss Lisa Boocock told the hearing: “The defendant was effectively a mule and two kilos of cocaine were found in total.

“When the defendant collected her luggage, she was questioned by Immigration officers and she told them a story that she had been travelling to the country for the Notting Hill Carnival. Located in a pocket was a written note that a woman had paid her £1,386 in sterling.

“She was then presented with her suitcase which was subjected to a search, and officers discovered seven packages of cocaine. Four packages were concealed on the corners of the suitcase, and three were found in the base of the suitcase under the lining. They were of 74 per cent and 70pc purity.

“The commercial price of the total amount of cocaine was calculated as £66,000.

“The street price was calculated up to £171,000. She was arrested and interviewed, but denied the offence. She said she had no knowledge of the cocaine in the suitcase.

“The defendant is 27 and has no previous convictions in this country”.

In mitigation, defence lawyer Alexander Leech said: “There was some financial advantage. It’s important to know she involved herself with this offence, without looking at her present circumstances, there is some degree of naivety.

“She had no influence on those above her in the chain. It was not her own operation. There was two kilos discovered, which equals a six year starting point in terms of imprisonment.

“She is away from her daughter and she is overwhelmed by the seriousness of the crime. She is trying to return to her. She is a woman of good character. She lost her career as a carer.

“She has lost contact with her six year old, who doesn’t know what to expect.

“She has occasional telephone contact, and her sister is currently caring for the child. This weighs upon her. She is aware she will be missing the key formative years of her daughter’s life whilst she is incarcerated in another country.

“There is a debt of despair on her.

“Couple that with a sense of remorse for her behaviour. It is not uncommon for women in her position who are targeted. She acknowledges her stupidity for the sum of £1,300. She is a single mother.”

Sentencing her, Judge Paul Lawton said: “Like many other women in your position, you were targeted and you imported white power, namely cocaine, into Manchester Airport.

“On August 23 this year, the drugs were disguised in a sophisticated way, but were detected by a drug detection dog. You denied knowledge of the drugs, but when this case came before this court, you admitted your guilt.

“You are 27 and a single mother of your six year old daughter. You have been separated from her in a foreign jurisdiction in HMP Styal.

“I am able to reduce the sentence from the starting point for the guilty plea and for the significant mitigation. You may be returned to Grenada upon your release, but that is for the relevant authorities”.