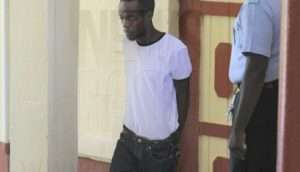 newsroom.gy- A 24-year-old ‘A’ Field Sophia, Greater Georgetown resident was on Tuesday charged for the murder of a man who was strangled to death with a belt on Church Street, Queenstown.

Ishaka John appeared before Chief Magistrate Ann McLennan and was not required to plead to the capital offence.

John’s attorney, George Thomas told the court that his client is a patient at the psychiatric clinic of the Georgetown Public Hospital Corporation (GPHC).

The Chief Magistrate remanded John to prison until November 7, 2019

It is alleged that John and Bowen were engaged in a scuffle during which the accused wrapped his belt around the man’s neck and strangled him until he died.

He attempted to run away but was apprehended by public-spirited citizens and handed over to the Police.