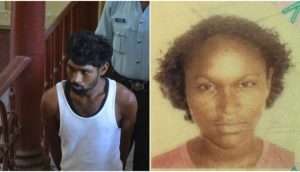 newsroom.gy- A 27-year-old man was on Tuesday charged with the murder of his reputed wife who recently died from second-degree burns she sustained after being doused with gasoline and set on fire.

Wazim Perreira known as ‘Johnny’ of North Sophia, Georgetown appeared before Chief Magistrate Ann McLennan and was remanded to prison until October 31, 2019.

Perreira was not required to plead to the capital offence which alleged that on October 10, 2019, at Georgetown, he murdered Olivia Defreitas.

Initially, Perreira was charged with attempted murder but the Director of Public Prosecutions advised that he is charged with murder following the death of the victim.

Defreitas died on October 10 while receiving treatment at the Georgetown Public Hospital.

According to reports, the couple has two minor children and Defreitas ended the relationship due to Perreira’s abusive behaviour.

On September 9, 2019, Perreira went to the woman’s house and requested to speak with her, but she refused and he left.

It is alleged that Perreira later returned to the house with a container of gasoline and doused Defreitas with it after which he set her on fire.

She received second-degree burns to her face, abdomen, chest and back.

Perreira, who is no stranger to the court, was recently released from prison after serving 18 months in jail for escaping from the Kitty Police Station.

In 2015, he was charged with attempted murder but the charge was later dismissed after he compensated the victim.