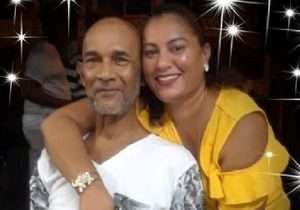 Today, her relatives will say their final goodbye to her.

Teeluck, 42, was killed last Wednesday during a power outage at her home, at Bois Bourg Village, Cedros.

She was snatched out of her neighbours’ house and was killed, her throat cut so savagely that she was almost decapitated.

A senior homicide investigator said yesterday that officers are yet to uncover a motive for the killing. Her cousin, Julie Ramdass, said the family does not believe that the attack was a random robbery and that she was the target, but they do not know why.

Teeluck was delivering eye drops and $1,400 to her ailing neighbour, sent from a relative, when the attack occurred.

Two criminals climbed up the steps to Teeluck’s neighbours’ house, forced the neighbours to the ground as they stole their cell phones and cash.

The criminals called out to Teeluck and when the woman approached them, they abducted her. Teeluck was chopped multiple times and her body found at the back of the house. Police said no one has as yet been arrested.

Her funeral will take place at 9 a.m., at Sunset Beach, Fanny Village, Point Fortin, then to Mosquito Creek for cremation.